Rachael Turner is an award-winning builder from Queensland, where she owns the successful construction company Front Porch Properties. She and her team specialise in Hampton-style homes, that have a modern farmhouse charm.

Rachael got in touch with us to work on a large 5 bedroom, 3 bathroom renovation of an old Queenslander home in Brisbane’s Coorparoo. Rachael has a particularly keen eye for design and farmhouse style, choosing all the materials from the roof tiling, to carpet, all the way to the bathroom shower and the laundry sink mixer! When you see the photos, you’ll see that her vision was completely met, with the use of many quality products on the market today.

Increasing street appeal and salability of homes are Rachael’s forté, and like everyone, she knows the latter lies heavily on the quality, function and look of the kitchens and bathrooms, not least, the kitchen taps and bathroom mixers! For this Brae Street property, Rachael wanted to raise the original home a full 1.8m to add an entire bottom level below, making it a bottom-heavy home, thus increasing its street appeal. Not being one to throw away any old charms from the original house, she prioritised preserving doors, cornices and ceiling roses where she could, as well as incorporating custom detailing, often uncommon in modern home builds. It is without much surprise then, that our Nostalgia Collection (a provincial tapware style), was one of Rachael’s first picks. She opted for both of Nostalgia’s available finishes; Antique Black and Chrome. Using her interior design knowledge, she skillfully tied in these black taps or chrome taps with lighting fixtures, window frames, cabinetry and/or tiling. Rachael also incorporated our modern tapware collection, Vivid Slimline in Gun Metal. Gun Metal possesses an elusive quality of being not quite grey, not quite brown, changing in different lights and allowing for the basin tapware to add to that rustic farmhouse charm. What Rachael seems to possess though, is a real knack for creating dream homes. These aren’t quickly constructed, pop-up houses. These are detailed and considered, down to the very last Robe Hook. During this collaboration, we watched as big decisions were made, installs done and learnt a few nifty tips and tricks along the way – check out her Instagram to catchup on the progress posts! But the style tip we liked the most was this:

Rachael’s approach to design is always to bring things harmoniously together, while allowing everything to have a bit of a moment in the limelight. There’s no denying the stand out items here. But when the details are truly studied, you start to understand the level of thought that has gone into this beautiful ‘modern farmhouse’ home. The style tip takeaway is simple: Allow yourself the time to consider every detail and how each will work together. The guest bathroom is a great example of her work at play. Creating dream homes certainly isn’t easy, but the richness and character of Rachael’s creations make it obvious that finding your style and infusing into every detail can really make a dream home come true! Firstly, the bathroom vanity is a reclaimed hall cabinet and was simply cut where the piping required access.

An exceptionally charming addition, it not only offers the traditional basin tap with a lovely base on which to stand, but also subtly pairs with the white waterproof timber-look wall panelling, horizontally lain for a twist on the more traditional vertical panelling. With white in mind, Rachael introduces the white bowl basin and the crisp white hand towel, gracefully matching in. Textures are then thrown into focus with the white tiles singing of years gone by, cast in imperfect shapes, rippling upon the wall’s surface. 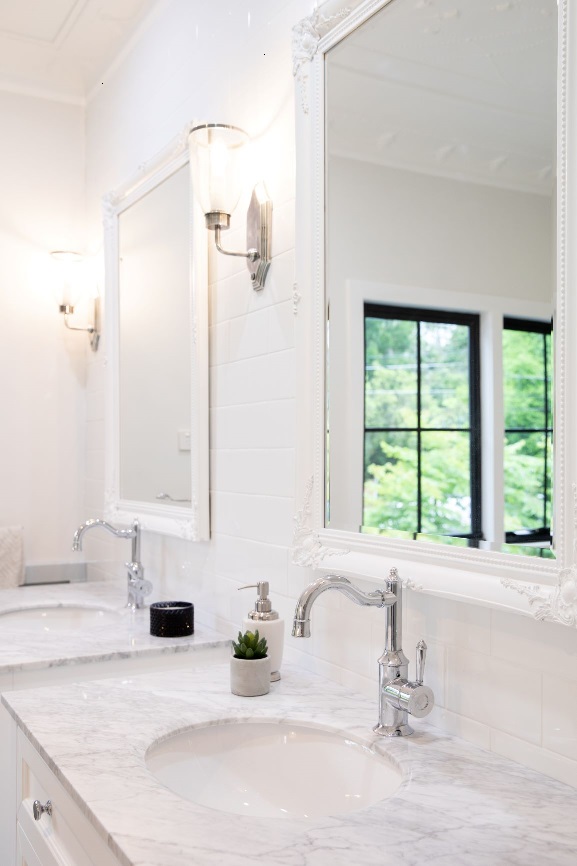 Lastly, the final touch is made with the Phoenix Nostalgia collection in Antique Black finish, designed to echo Victorian era styles and featuring a unique copper detail for a naturally aged look. These don’t sit alone though, they are teamed with the black industrial style caged lighting, black window frames and a circular mirror with thin black steel frame. We are positively smitten!